“Ogopogo found!” Would you believe it? Dreaded by the Okanagan First Nation people long ago, it is seldom seen today.

The Ogopogo or Naitaka (Salish: n’ha-a-itk) has a very separate evolution from the 360 million year old Stethacanthus shark and has undergone a metamorphosis into a flying, walking and swimming modern age fire breathing dragon. 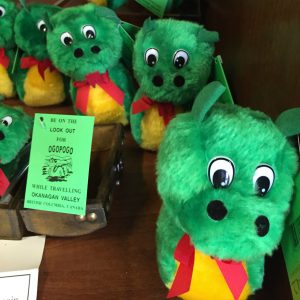 But would you believe, many people say “It’s just a log”, but that does not cut it. Logs don’t move. Look closer and you many realize that what you are seeing is not just a log, but something else. Look again and it may have a head like a horse, horns like a goat, a forked tongue like a lizard, a body like a monitor lizard, and the wing span of a plane. Could it be the Ogopogo? The ultimate chameleon?

The Ogopogo supposedly has the ability to shut down bodily functions to conserve oxygen, you could say this makes it the ultimate survivor of the dinosaurs. Perfectly camouflaged after hundreds of millions of years of evolution, the Ogopogo continues to elude capture.

Come to the Okanagan and let your imagination run wild. Now what was that in the water? A log? No, it can’t be! 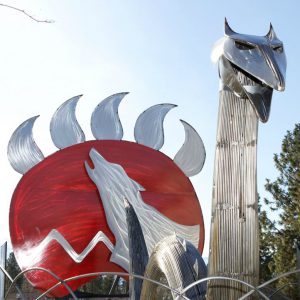 Andrew Bennett has long been fascinated by the Ogopogo and has done extensive research on this topic. If you have an Ogopogo story you would like to share with him, contact him at sunnyokanagan@telus.net

For more information on n’ha-a-itk visit the Sncəwips Heritage Museum at https://sncewipsmuseum.org/ . According to Westbank First Nation Elders, the meaning of N’ha-a’itk is Sacred Spirit of the Lake.