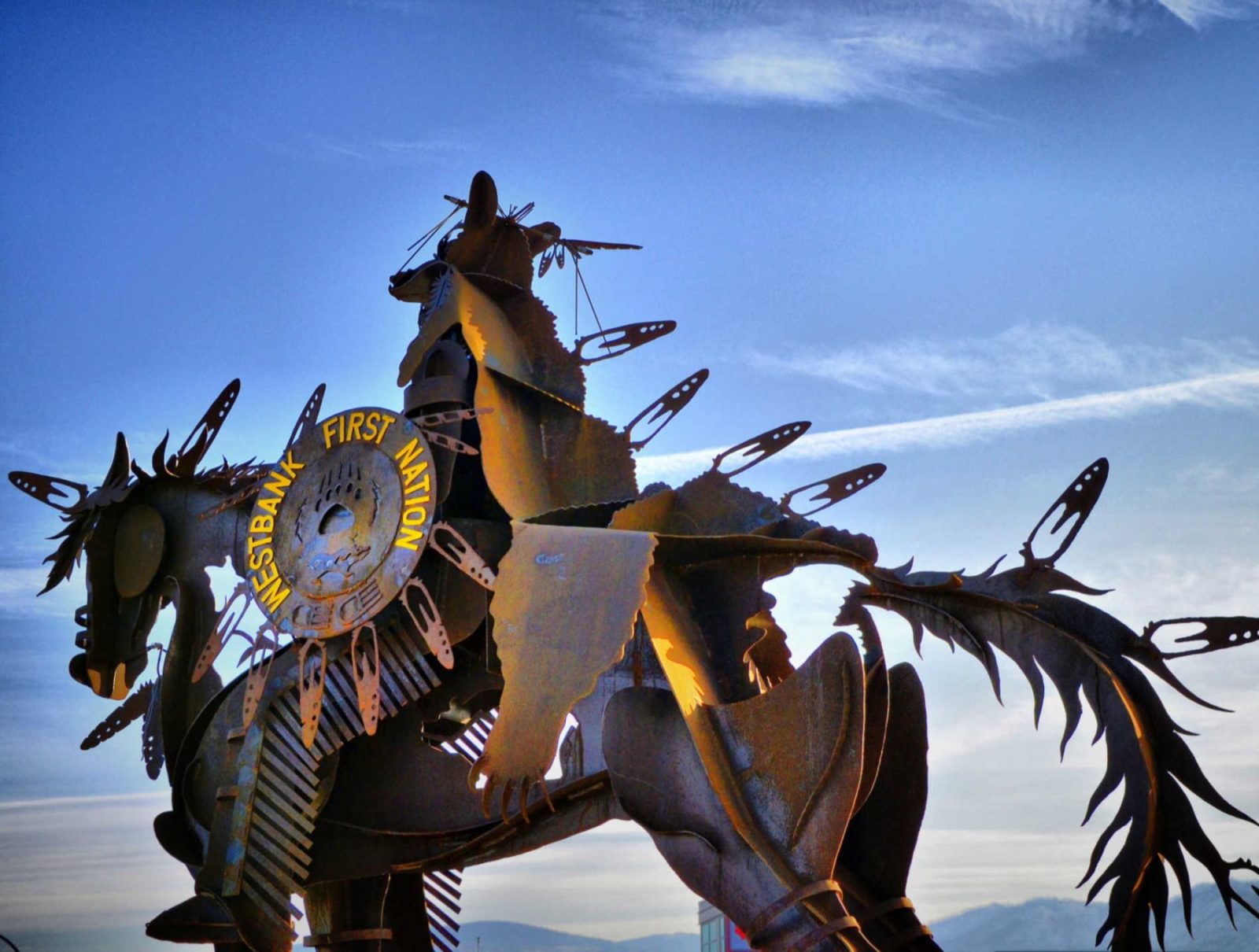 Below you will find information about each of these public art pieces and we invite you to take a self guided tour to see them all in person!

Medicine Bear (2011)
Artist: Smoker Marchand | 3604 Carrington Road (snyatan Shopping Centre)
Artist statement: “The bear was strong medicine because he was the strongest and most powerful of the animal people and known for his courage and protectiveness. There is nothing more dangerous than a bear protecting its family, which I believe is a symbol of First Nation efforts to bring life and a healthy environment to our community.” 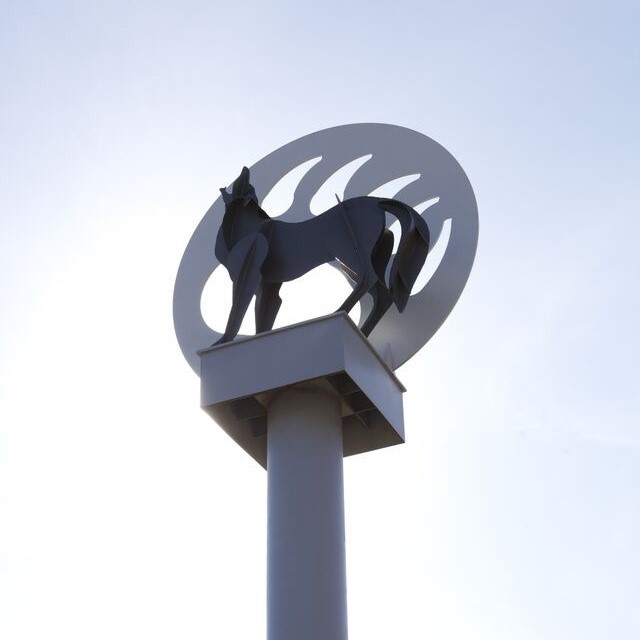 Artist: Smoker Marchand | Campbell Road roundabouts
These two monuments, found on either side of William R. Bennett Bridge entrance, showcase a coyote and grizzly bear paw. sen’k’lip (coyote) was sent by k̓ʷuləncútn (Creator) to help our people survive on this land. A plaque at the site states: “The Okanagan people are observers of the beauty of nature, and active participants in the protection of this area. The Okanagan people used this place as a village and lake crossing for thousands of years.”

Elk (2013)
Artist: Smoker Marchand | 2180 Elk Road
For centuries, those who successfully hunted elk were recognized as important leaders of traditional practices. Quite often, the best hunters, or those whose families were great hunters, have been recognized as those fortunate enough to adorn the porcelain teeth of the elk.

Veterans Memorial (2014)
Artist: Smoker Marchand | 1900 Quail Lane
Approximately 7,000 Indigenous people served in the Canadian Armed Forces during the First and Second World Wars. This monument honours both Westbank First Nation veterans and all who have served, and continue to serve, in the Canadian and American Armed Forces. Artist statement: “I wanted to show a strong Indian man. I wanted to show a strong Indian woman. And I wanted to show a soldier who could be any soldier— he could be Native, he could be any soldier—because I think it’s important to represent all our people. My uncle said that when they got into the trenches, they were a band of brothers. There was no colour. There was no difference in who they were. They fought together, and I think that’s really important.” 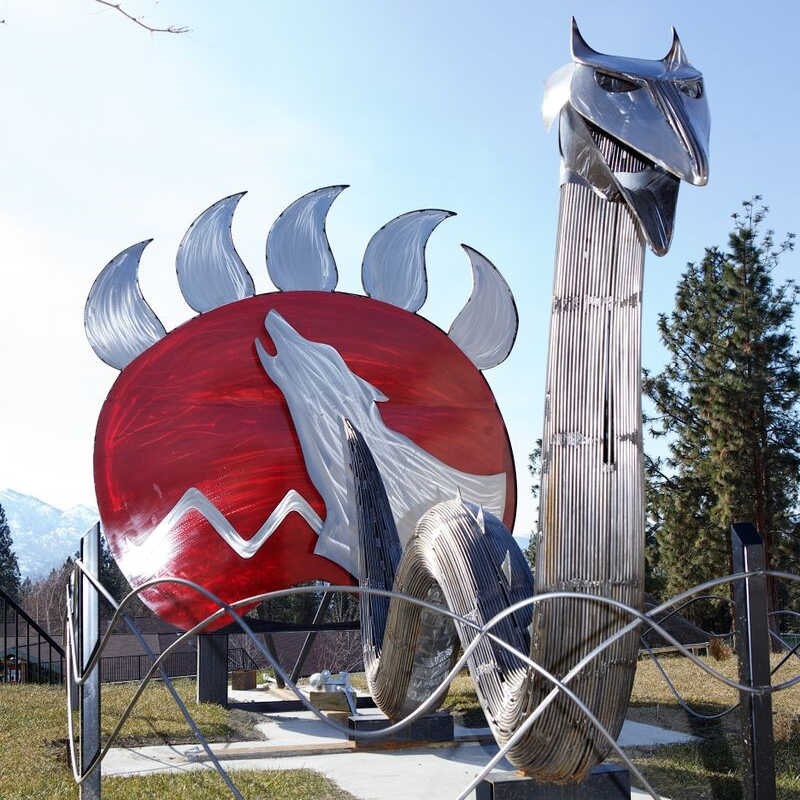 Artist: Clint George | 1900 Quail Lane
This sculpture features elements of the WFN logo, which captures the essence of syilx teachings, culture, and history: sen’klip, the trickster and teacher; kiláwnaʔ; nx̌aʔx̌ʔitkʷ; and Okanagan Lake.

qʷac̓iʔ (Pit House)
1900 Quail Lane
qʷac̓iʔ were traditionally used during the winter months, utilizing geothermal energy, the warmth of the mother earth, to keep the people safe. They were well kept, as they were more than a resting place; they were also a space to share stories and celebrate. When spring arrived, the syilx people would travel with portable summer tule mat dwellings / tukʷta̓nilx

nx̌aʔx̌ʔitkʷ (2013)
Artist: Smoker Marchand | 525 Hwy 97 (Okanagan Lake Shopping Centre)
The sacred spirit of the lake, nx ̌aʔx̌ʔitkʷ, lives in the water but can also move to the land and air. nx ̌aʔx̌ʔitkʷ reminds us to be mindful of our resources; if nx ̌aʔx̌ʔitkʷ disappears due to pollution and misuse of the water, so do the plants, medicines, trees, and foods that sustain us.