Staff from the Westbank Museum and Visitor Centre recently visited the Sncewips Heritage Museum on a familiarization tour. This museum opened in 2014, and has various displays that showcase the living history of the Okanagan nation. Sncewips offers a variety of tours including a tour of the community core, a tour of the land and environment, and a cultural tour. The museum’s website describes their museum tour as an opportunity to “learn about pre-contact, recent history, and important milestones of the Westbank First Nation.” On our cultural tour through the museum’s exhibits, we learned about what it means to be a part of a living history and heritage. Our guides, Kayt and Coralee, explained that the Westbank First Nation peoples of this area, and other areas in Canada, have continued to live their traditions and spirituality throughout a history of colonial hardships.

We particularly enjoyed seeing the handcrafted canoe, which is a part of the museum’s displays. It was made by community member, Gordon Marchand. He was diagnosed with cancer and wanted to pass on the knowledge of making a dugout canoe to his son, Frank. He made at least four canoes after his diagnosis, documenting the process before his passing. Following his death, the title of Master Carver was passed to Frank.

We were given the opportunity to learn about the importance of strong family values in the syilx community. Elders are considered to be knowledge, history and language keepers. Thus, they share various wisdoms about life with the younger generation. Our guide, Kayt, explained that syilx wisdom often appears in dreams through which members of the community develop a strong instinct about the land and spirituality. Kayt described the syilx people as diplomatic, humble, and kind. This is what the culture is rooted in; important values which are carried through generations, and can be transferred from culture to culture. The Sncewips Heritage Museum acts as a centre for learning and sharing these aspects of syilx living history. 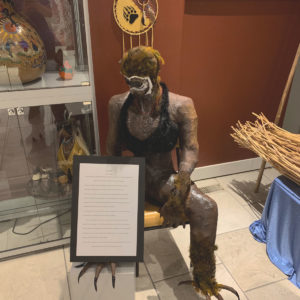 We learned the correct pronunciation of Nsyilxcən words and attempted to pronounce some, which proved to be quite tricky. One of our favorites is nx̌aʔx̌ʔitkʷ, the syilx word for Ogopogo. Coralee told us that nx̌aʔx̌ʔitkʷ is not a lake monster, as many people have thought it to be. Rather, nx̌aʔx̌ʔitkʷ (or Ogopogo) is a spirit of the lake, and the lake water itself. In syilx culture, language was used in the form of art, through stories and song. We heard a traditional story about Skalula (a monster turned medicine woman) and Coyote, who are figures in syilx storytelling. A popular theme in these tales is the transformation of an evil being, or a monster, into another animal. Skalula transforms into an owl at the end of her story; the owl is seen as an omen in syilx culture. However, the omen is not to be feared but rather respected as a guide throughout the night.

Our guides explained that the Sncewips Heritage Museum prioritizes repatriation of syilx artifacts. Many museums and institutions still hold items that belong in the syilx First Nation. The members of the museum actively work to create and maintain respectful relationships during the repatriation process. Sncewips also works on conservation and facilitates safe storage of culturally significant and sensitive items. Sncewips’ website states, “We can also provide a final home for culturally significant objects of our ancestors as we are best suited to represent and interpret these items as they reflect the heritage and natural history of the syilx people.” 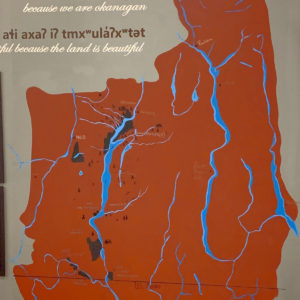 We really believe that Sncewips Heritage Museum is a place that educates visitors with a “perspective that creates cultural awareness among the syilx nation, with the opportunity to clarify any questions during your visit”! Our guides were incredibly welcoming and approachable, and showed a deep connection to Westbank First Nation history. We highly recommend visiting Sncewips! 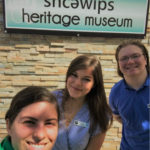